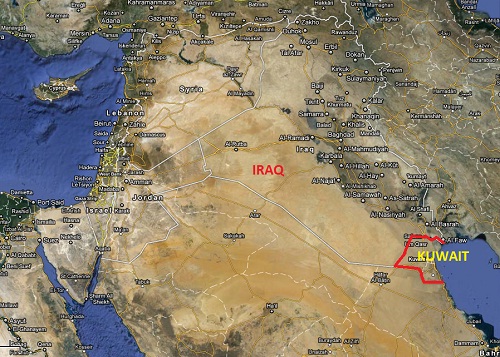 Kuwait lies at the north-west corner of the Arabian Gulf, between 28o and 30o latitudes and between 46o and 48o longitudes. To the north and the west, it shares a border of 240 km (149 miles) with the Republic of Iraq, and to the south and south-west it shares 250 km (155 miles) with the Kingdom of Saudi Arabia. On the east it has a coastline of 290 km (181 miles) on the Arabian Gulf. The total area of the State of Kuwait is 17,818 sq km. Most of the mainland is a flat sandy desert gradually sloping towards sea.

Due to the location of Kuwait in the Sahara geographical region, the weather of the country is characterized by long, hot and dry summers and short, warm and sometimes rainy winters. Dust storms almost always occur with a rise in humidity during summer. The highest temperature ever recorded was 52oC in July 1978, (making Kuwait the fourth hottest place in the world). The lowest temperature, -6oC, was recorded in January 1964. There is a wide variation of temperature, ranging from an average of 45oC in summer to an average of 8oC in winter. Such climate fluctuation is often accompanied by a change in the annual rainfall -- which may vary from 22 mm one year to 352 mm the next.

Since ancient times Kuwait has served as the gateway to the Middle East because of its geographical location. In just a few decades, after the discovery of oil, Kuwait has been transformed from a nation of fishermen and traders to one of the richest and most developed nations in the world –offering state-of-the-art amenities, secure infrastructural facilities and technical excellent—and is respected around the world. The Kuwaitis’ pride in their history, heritage and national progress has given rise to an identity that is uniquely Kuwaiti.